Van Patrick was good and annoying 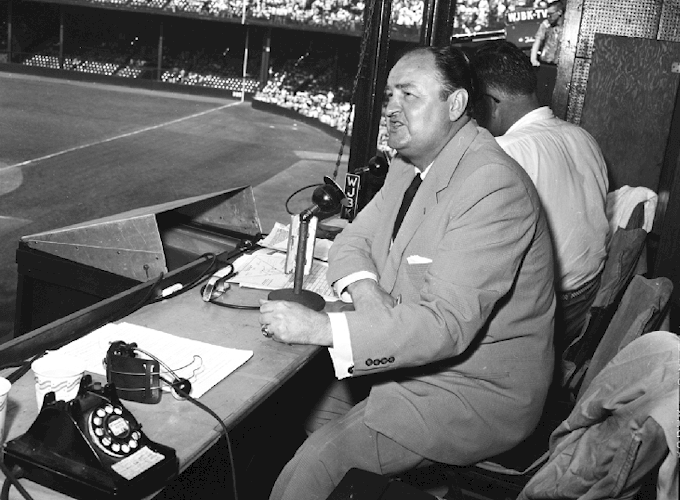 “You remember Van Patrick?” a friend asked me the other day over cheeseburgers at Miller’s.

“That guy was so annoying,” my buddy said. “But he was good.”

Good and annoying. I suppose that was Van Patrick in a nutshell.

With another football season in full swing, it’s somewhat shocking to add up the years and find that it’s been some four decades since “the Ol’ Announcer,” as Patrick liked to call himself, last described the action from his perch in the broadcast booth.

Beginning in 1950, Patrick’s rich, distinctive voice was the omniscient soundtrack of Detroit Lions football. His death from cancer at the start of the 1974 season ended a quarter-century run in the Lions’ booth. By then he had introduced such now-familiar phrases as “home-run ball” (a long pass) and “cliffhanger” (a close game) to the sports broadcasting lexicon. He also nicknamed the Lions’ defensive front four of Alex Karras, Roger Brown, Sam Williams, and Darris McCord the “Fearsome Foursome.”

Van Patrick was an Arkansas native who cut his broadcasting teeth at stations in Texas, Buffalo, and Cleveland before coming to Detroit in 1949. He teamed up with Harry Heilmann on Detroit Tigers broadcasts, taking over the mike after Heilmann’s death in 1951. He was the Tigers’ play-by-play man through the 1959 season, when he gave way to Ernie Harwell because of a change in the team’s beer sponsorship. Patrick was too closely identified with Goebel’s “red rooster” to suit Stroh’s.

Not that Patrick was lacking for work. He was America’s busiest sportscaster, typically chalking up 150,000 miles on airplanes each year. It was common for him to cover three or four major sporting events on a weekend, including auto races, golf tournaments, and basketball games. This was in addition to his duties as sports director of WJBK-TV (Channel 2), then the local CBS affiliate, and the Mutual Broadcasting System. He did Notre Dame football broadcasts and was the radio voice for the first few seasons of Monday Night Football. Patrick also had an interest in four radio stations, including Dearborn’s WKNR (“Keener 13”). Patrick, who had grown up poor, enjoyed living large. He was always nattily dressed and owned a home overlooking a Dearborn golf course. Fleshy and balding, his vanity caused him to wear a toupee that was so bad, it became an imperishable part of his image.

Patrick was popular, in a Howard Cosell kind of way, but not everybody appreciated his style. Lucidity to some was verbosity to others. Sports Illustrated once grumped after he worked a championship game at Briggs Stadium: “Certainly millions of professional football fans came away from the TV broadcast of the Detroit-Cleveland game two weeks ago in a mood to cuff children, because an announcer named Van Patrick doggedly persisted—in hallowed radio fashion—in telling them in detail, and without surcease, what they could already see for themselves on their own screens.”

Well, that was the Ol’ Announcer, all right. Good and annoying—and an original.