Why did the Pistons walk off the court without shaking hands with Jordan’s Bulls? 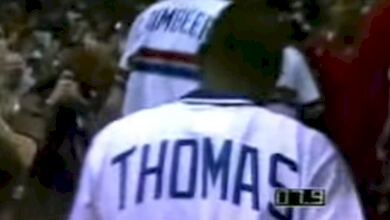 Bill Laimbeer and Isiah Thomas lead the Detroit Pistons off the court in Game Four of the 1991 Eastern Conference Finals before time has expired.

Nearly twenty five years later, the “walk-off,” a term coined to describe the final act of the Pistons’ “Bad Boy” era, remains a memorable moment in franchise history that sparked controversy and signaled the changing of the guard in the NBA in the early 1990s.

Was it simply a display of the team’s tight bond that remained unbreakable despite Michael Jordan and the Chicago Bulls putting an end to the Bill Laimbeer and Isiah Thomas-led Detroit dynasty?

Or was it an uncalled for sign of disrespect?

The debate continues to this day, with many non-Detroit fans saying the latter is true when it comes to the Pistons’ decision to not shake the hands of Jordan and the Bulls at the conclusion of the 1991 Eastern Conference Finals.

However, many of these “Bad Boy” critics do not remember or have allowed the memory of the Larry Bird-led Boston Celtics doing the same thing after they suffered defeat to the Pistons in the 1988 Eastern Conference Finals to slip their minds.

The Celtics got a pass from many NBA fans and pundits when they executed their own “walk-off” before the clock rang zero in the ’88 Easter Conference Finals due to “Larry Legend’s” status as a do-no-wrong type of guy and player.

Additionally, the Celtics were viewed as an organization that played the game the right way 24/7.

The exact opposite was true for the “Bad Boy” Pistons, and that is why things went awry for the franchise when it deployed its own version of a team unified “walk-off.”

These Pistons were already known as the “thugs” of the league and as a team that resembled a group of wrestlers from the WWE more than it did a professional hoops team.

They would rough you up, knock you down and rack up tons of fines in the process.

Just ask those who were brave enough to drive the lane against the intimidating Detroit frontcourt of Laimbeer, Rick Mahorn and Dennis Rodman.

In fact, for the 1988-89 campaign, the squad’s fines totaled $34,500, which made the Pistons easily the highest fined team in the league.

They gladly embraced the villainous role, and the opposition knew about it and showed a lack of respect toward the Pistons because of it.

Spearheading the lack of respect movement at the time was the Bulls’ Jordan.

The Bulls with Jordan failed to get past the Pistons in three straight playoff series from 1988-90, which definitely left a sour taste in the superstar’s mouth regarding Laimbeer and Co.

During his head-to-head matchups with Detroit, Jordan became the primary target of the Pistons’ physical play and the subject of a series of defensive tactics used to guard him called “The Jordan Rules.”

This defensive strategy involved double teaming MJ and “nailing him” — as “Bad Boys” coach Chuck Daly put it — whenever he tried to get to the rim.

It caused MJ to hit the weight room and to work harder than ever before to get strong enough to sustain the hits and take downs from the Pistons.

Helped by his extra work, Jordan became strong enough and ultimately got past the Pistons for the first time in his illustrious career in ’91.

After doing his part to rid the league of “The Bad Boys” in a “clean” series sweep, Jordan commented, “The dirty play and the flagrant fouls and unsportsmanlike conduct, hopefully that will be eliminated from the game with them gone.”

He added, “I think people are happy the game will get back to a clean game.”

The Pistons were classless in how they handled themselves after bowing out of the ’91 playoffs. However, Jordan’s comments were no better.

By the way, they were not the only classless remarks he made about the Pistons.

Before the series was even over, Jordan spoke about how “The Bad Boys” were bad for the game.

As Thomas noted during a 2013 recording of NBA TV’s Open Court, “They (the Bulls) were up 3-0, and then, they had this press conference just totally disrespecting us as champions.”

As my mother told me a long time ago, two wrongs do not make a right.

But at the same time, the comments of Jordan and the Bulls were not warranted.

It’s why Thomas and the Pistons had every right to feel slighted.

However, at the end of the day, the Isiah, Bad Bill, and the Pistons should have still taken the high road and shaken the hands of those disrespectful Bulls.

4.7
5
a month ago
I am astounded at how awesome these guys were. I had an item that was damaged during transit, they sent a new one out immediately. Such nice people.
5
5 months ago
Fantastic experience! If you’re in the market for anything Detroit sports, do yourself a favor and shop local. These guys are the best. I live up north. Had an old Red Wings Jersey I wanted customized. Sent it down to them and it came back absolutely perfect!
5
3 months ago
Super friendly staff and the in-store pickup is really easy. Very happy to have found another local place to support!
5
4 months ago
Great service! I ordered a Tigers hat and I picked the wrong shipping method. Called the store and my problem was handled with no hesitation. How often does that happen. Will shop here again for sure. Support Local Small Business
5
5 months ago
Had a Redwings jersey customized and the quality of work and turn around time were only beat by their amazing price. I’m always stopped to ask where I got my Zetterberg jersey from when ever I wear it. I would highly recommend their service, I know I will return if I need a Detroit jersey made!